Long lived SSH keys have always been a very real attack vector for EC2 instances, mostly because of the need to share and manage those keys between people and teams. This has been a constant headache for people trying to keep their environments secure, and the announcement of EC2 Instance Connect for SSH access looks like it’s going to be the solution that takes the headache away.

AWS previously promoted using Session Manager in AWS Systems Manager to run a browser-based interactive shell for accessing EC2 instances. Although this was a better solution, it never really felt like a great solution, which is where EC2 Instance Connect comes in, with what seems like a much more thought out and simplified solution1. Amazon sums up the benefits to their customers security posture as follows:

This sounds like a great solution, but before we dive in and see what it looks like in practice, let’s just take a quick look at how it works. 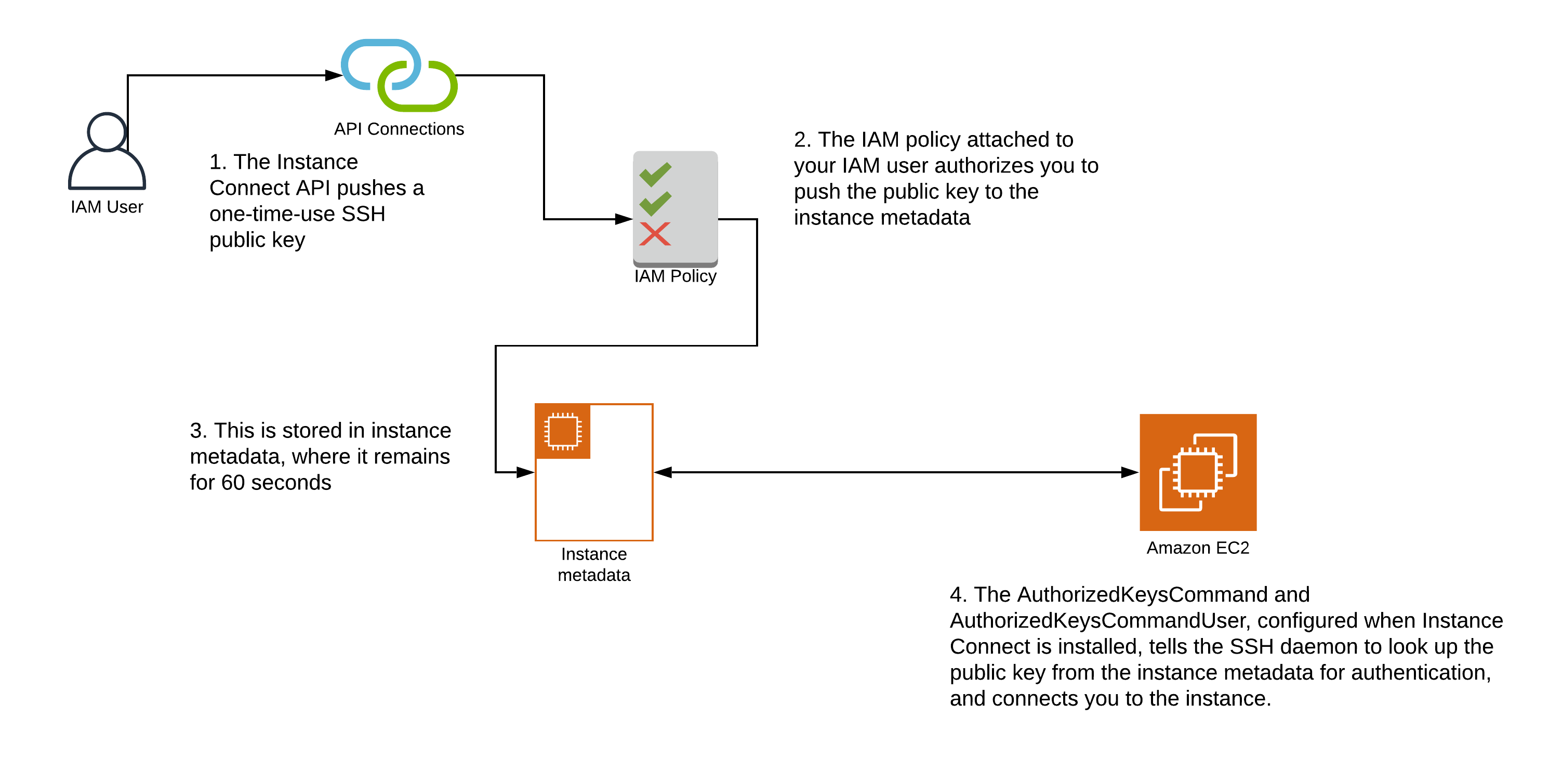 To verify the install, you can check that the following new files appear in /opt/aws/bin/ (for Ubuntu, you’ll find the files in /usr/share/ec2-instance-connect/).

You will also need to ensure that your instance(s) allow inbound SSH traffic from the corresponding AWS IP Address Ranges for the EC2_INSTANCE_CONNECT service, not just your external IP address.

In order for an IAM user to connect to an instance, they will need permission to push the public key to the instance. The following policy document provides the required permissions for someone to connect using either the AWS Console / SSH client or the EC2 Instance Connect CLI.

A couple of points since there are some new permissions that have been introduced and some things you’ll need to change in your own policies:

Now we’ve set up the instance and have the right permissions assigned, we should be able to go ahead and connect to the instance using any of these instances described here.

This is a simple method, which just required you to choose the appropriate connection method for your instance.

The result is a browser based interactive console, which looks like a good option for one-time use cases. 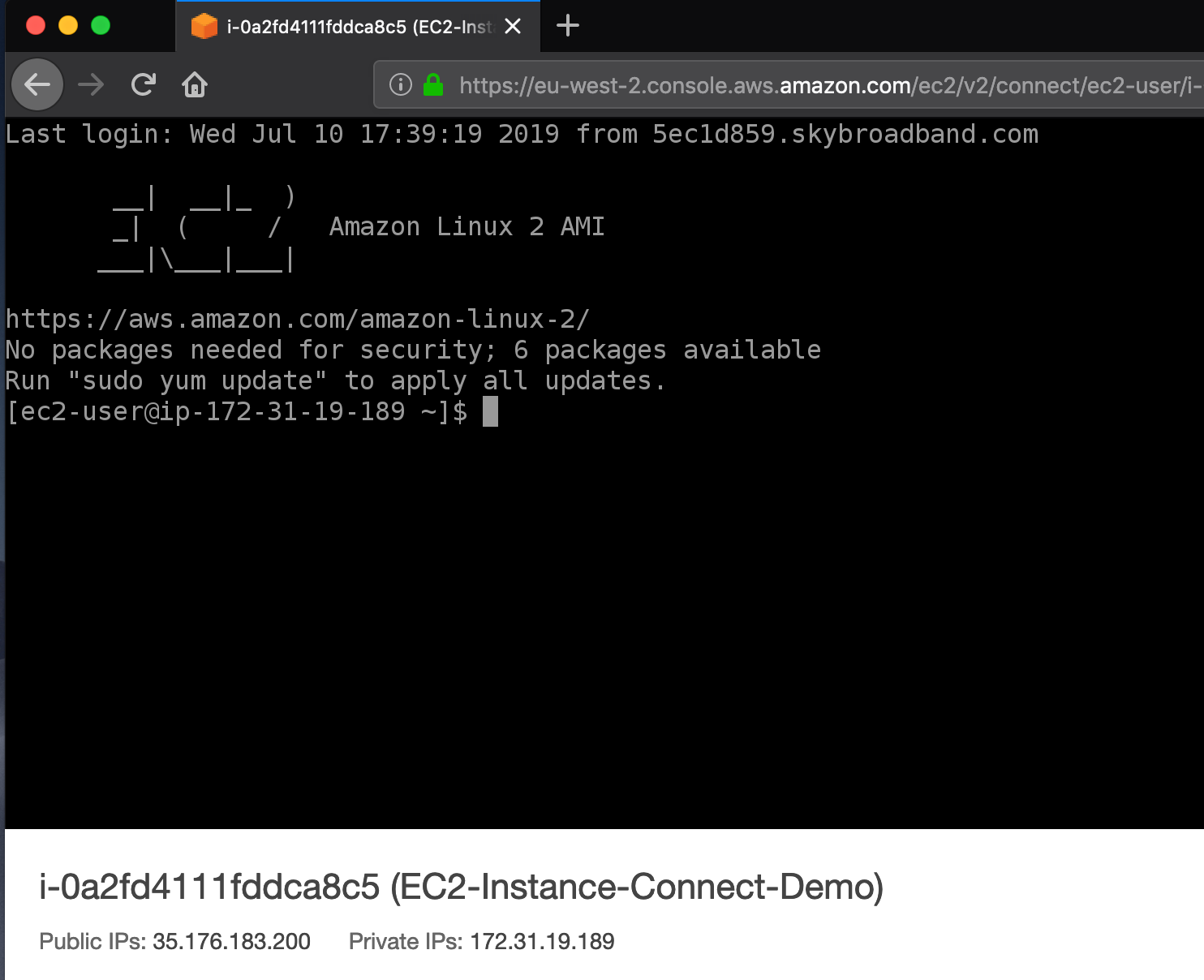 Before you can use this option, you’ll need to install the EC2 Instance Connect CLI, which contains a single command - mssh instance_id. When issuing the command, three actions are initiated from the call:

Once installed, you can connect using the following command for Amazon Linux 2 (note that for Ubuntu, you will need to prefix the instance id with the username - mssh ubuntu@i-001234a4bf70dec41EXAMPLE)

Using an SSH Client with an Existing Key

Using this method, you will first need to generate your own SSH private and public key pairs if you don’t already have a pair to use. Straight away, this puts me off this option - it lends itself to people using long-lived keys for multiple instances, which removes all of the benefits we’ve seen so far when using one-time use SSH keys.

I already have a key pair available, so I’ll push the public key to the instance using the following command.

The next step is to connect to the instance using the private key.

As with the other methods, it’s seamless - but again, I’m not sure about this options in terms of maximising your security posture.

As promised, every connection is logged in CloudTrail, which is a great feature to have built-in rather than have to configure yourself on individual accounts. The following shows the final connection that we made.

Enabling Instance Connect on a per instance basis sounds like a lot of hassle. You’re probably replacing instances on at least a semi-regular basis, which means that you could add this into whatever build process you have.

For example, you could use an SSM document and tagging strategy to install the Instance Connect package based on the AMI. Alternatively. you could bake it into you current image or script it into your deployment process